Mother Marie Andre Campbell, PCPA, Abbess of Our Lady of Solitude Monastery in Tonopah, the First Abbess of the Diocese of Phoenix!

Dear Brothers and Sisters in Christ,

On Saturday, March 19, the Feast of St. Joseph, Bishop Thomas J. Olmsted installed and gave his blessing upon Mother Marie Andre, PCPA (Poor Clares of Perpetual Adoration) as the First Abbess of Our Lady of Solitude Monastery in Tonopah and the first of the Diocese of Phoenix.  This historic event was a blessing bestowed upon the entire Diocese as Mother Marie Andre was given the Crosier of St.Clare symbolizing her role as a shepherdess and spiritual mother for the entire Diocese of Phoenix.  The Installation Mass was celebrated at 10 a.m. in a very full Chapel of Our Lady of Solitude Monastery.   Bishop Olmsted was the main celebrant.  Among those concelebrating were Fr. Fred Adamson, V.G., Fr. Chris Fraser, Fr. Michael Straley, Fr. Anthony, the chaplain of the Poor Clares, Fr. Paschal, MFVA as well as Fr. Augustine Lieb, one of the new Franciscan Friars of the Holy Spirit.

Franciscan Friars – OFM, Order of Friars Minor founded by St. Francis of Assisi are known as “The First Order” of Franciscans along with two other independent branches: the Capuchin Franciscans (OFM Cap.) and the Conventual Franciscans (OFM Conv.).  Franciscan Women Religious Institutes that live by the Rule of St. Francis of Assisi are known as “The Second Order” which includes The Poor Clares who were originally founded by St. Clare of Assisi.  Mother Marie Andre and the “Desert Nuns” in Tonopah are Poor Clares of Perpetual Adoration (PCPA), a Monastic or “contemplative” community who live religious life through monastic profession.

Here is an explanation of the Monastic Life by St. John Paul II in Vita Consecrata, #6:

“The Synod Fathers from the Eastern Catholic Churches and the representatives of the other Churches of the East emphasized the evangelical values of monastic life,which appeared at the dawn of Christianity and which still flourishes in their territories, especially in the Orthodox Churches.

From the first centuries of the Church, men and women have felt called to imitate the Incarnate Word who took on the condition of a servant. They have sought to follow him by living in a particularly radical way, through monastic profession, the demands flowing from baptismal participation in the Paschal Mystery of his Death and Resurrection. In this way, by becoming bearers of the Cross (staurophoroi), they have striven to become bearers of the Spirit (pneumatophoroi), authentically spiritual men and women, capable of endowing history with hidden fruitfulness by unceasing praise and intercession, by spiritual counsels and works of charity.In its desire to transfigure the world and life itself in expectation of the definitive vision of God’s countenance, Eastern monasticism gives pride of place to conversion, self-renunciation and compunction of heart, the quest for hesychia or interior peace, ceaseless prayer, fasting and vigils, spiritual combat and silence, Paschal joy in the presence of the Lord and the expectation of his definitive coming, and the oblation of self and personal possessions, lived in the holy communion of the monastery or in the solitude of the hermitage.

The West too from the first centuries of the Church has practiced the monastic life and has experienced a great variety of expressions of it, both cenobitic and eremetical. In its present form, inspired above all by Saint Benedict, Western monasticism is the heir of the great number of men and women who, leaving behind life in the world, sought God and dedicated themselves to him, “preferring nothing to the love of Christ”.  The monks of today likewise strive to create a harmonious balance between the interior life and work in the evangelical commitment to conversion of life, obedience and stability, and in persevering dedication to meditation on God’s word (lectio divina), the celebration of the Liturgy and prayer.  In the heart of the Church and the world, monasteries have been and continue to be eloquent signs of communion, welcoming abodes for those seeking God and the things of the spirit, schools of faith and true places of study, dialogue and culture for the building up of the life of the Church and of the earthly city itself, in expectation of the heavenly city.”

Our Lady of Solitude Monastery in Tonopah, Arizona

The Sanctuary of the Chapel

Stained Glass Windows and Stations of the Cross 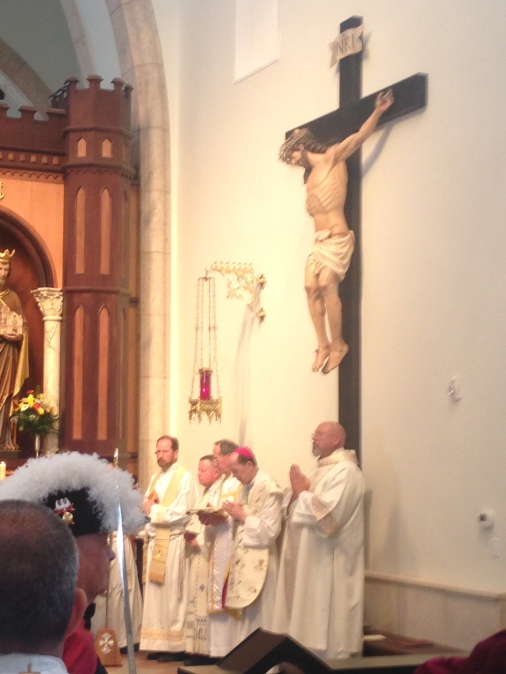 What an amazing providential occurrence that just a week after this installation, the foundress of the Poor Clares of Perpetual Adoration, Mother Angelica, passed away on Easter Sunday, March 27.  Mother Angelica is world famous for founding EWTN, the Eternal Word Television Network.  We are so grateful to her for her truthfulness and strong evangelization all over the world through radio and television broadcasting.

“My God, You are my anchor on a stormy sea, my serenity on a windy night, my hope when all else fails. Your Presence surrounds me like a protective shield and when the arrows of my selfishness pierce through, Your loving arms extend themselves to reach out and grasp my wandering soul.” – Mother Angelica

If you would like to read about the life of Mother Angelica, I recommend Raymond Arroyo’s Book, Mother Angelica: The Remarkable Story of a Nun, Her Nerve, and a Network of Miracles, which was published May 15, 2007.  It is a book that will keep you laughing!

Her Vigil and Funeral Mass Schedule, which Bishop Olmsted is attending, is as follows:

Vigil Service and Rosary
Prayer Vigil and Rosary in honor of EWTN Foundress, Mother Angelica, from the Shrine of the Most Blessed Sacrament in Hanceville, Al.

Mass of Christian Burial
Archbishop Charles J. Chaput presides over the Solemn Funeral Mass for EWTN Foundress, Mother Angelica, live from the Shrine of the Most Blessed Sacrament in Hanceville, Al.

What’s new?  The Franciscan Friars of the Holy Spirit, on the Gila River Reservation at Saint John the Baptist Mission in Laveen.

St. John the Baptist Mission Church in Laveen where the Franciscan Friars serve. 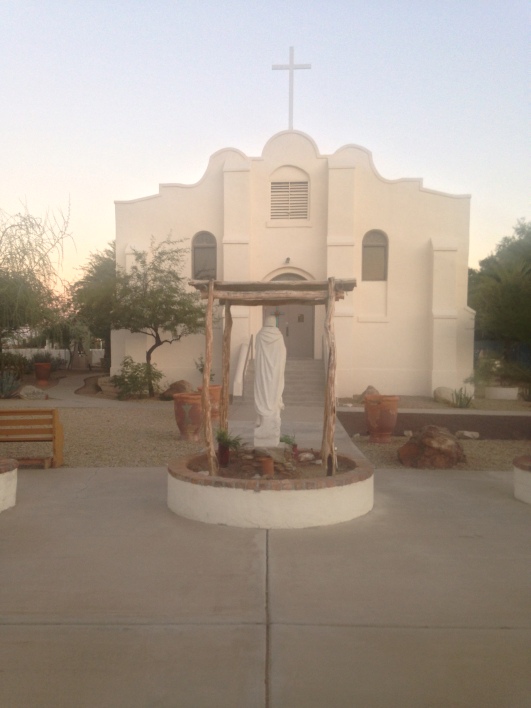 Fr. Brad LePage, the Superior, giving a talk to Religious. 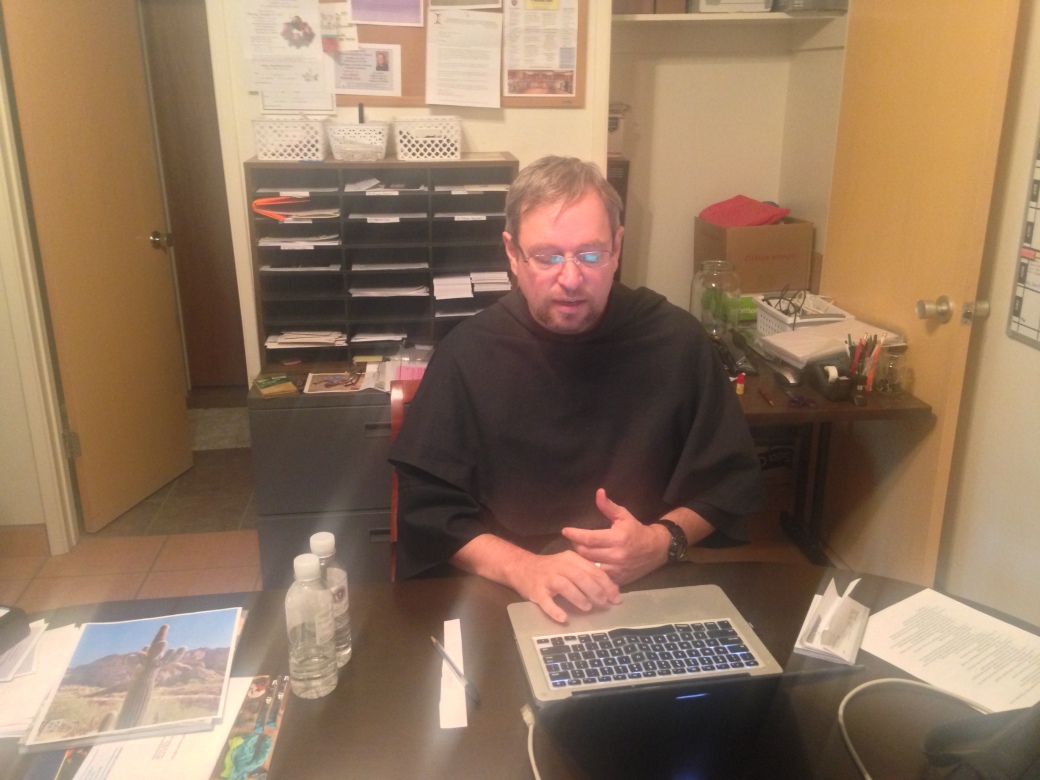 Fr. Augustine Lieb, grateful for a new Xerox copying machine which will serve the Parish.

In November, Bro. James showed us the grounds with a plan for new Stations of the Cross.

A Tour of the Chapel in the Friary

A Simple Altar in the Chapel

Fr. Augustine with a Monstrance

A Tour of the Church 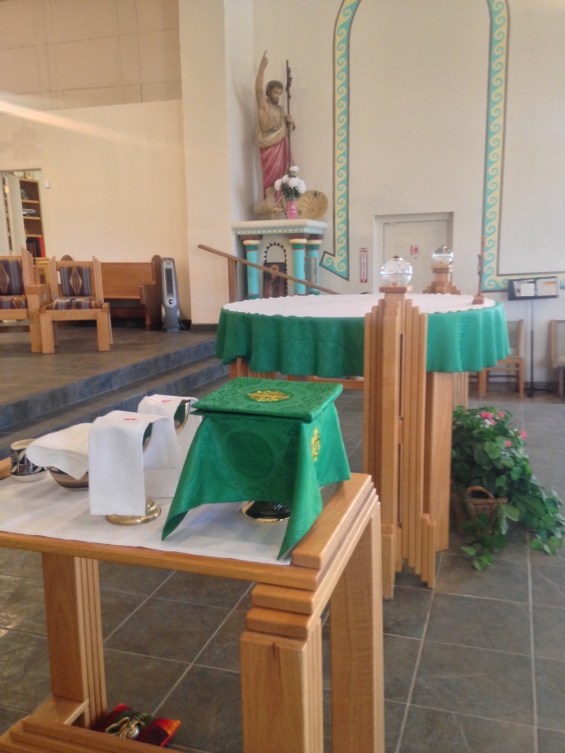 All is in readiness for the Holy Sacrifice of the Mass.

The Crucifix above the Main Altar.

The Main Altar in the Church depicting the Last Supper.

Statue and Relic of St. John the Baptist, the Parish’s Patron. 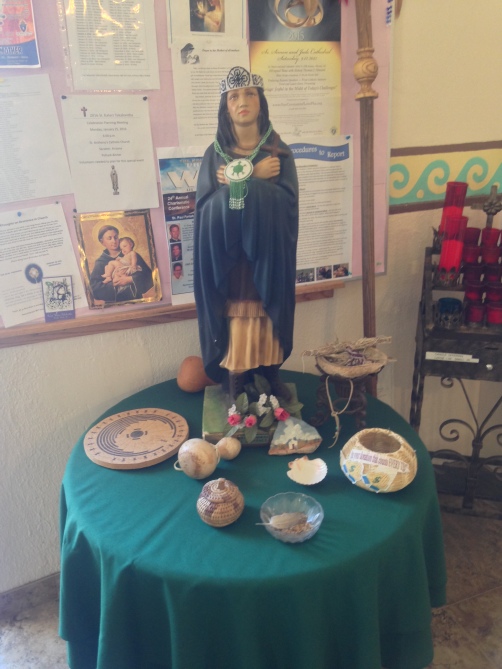 St. Kateri Tekakwitha, the Lily of the Mohawks.

A Tour of the Grounds at St. John’s Mission 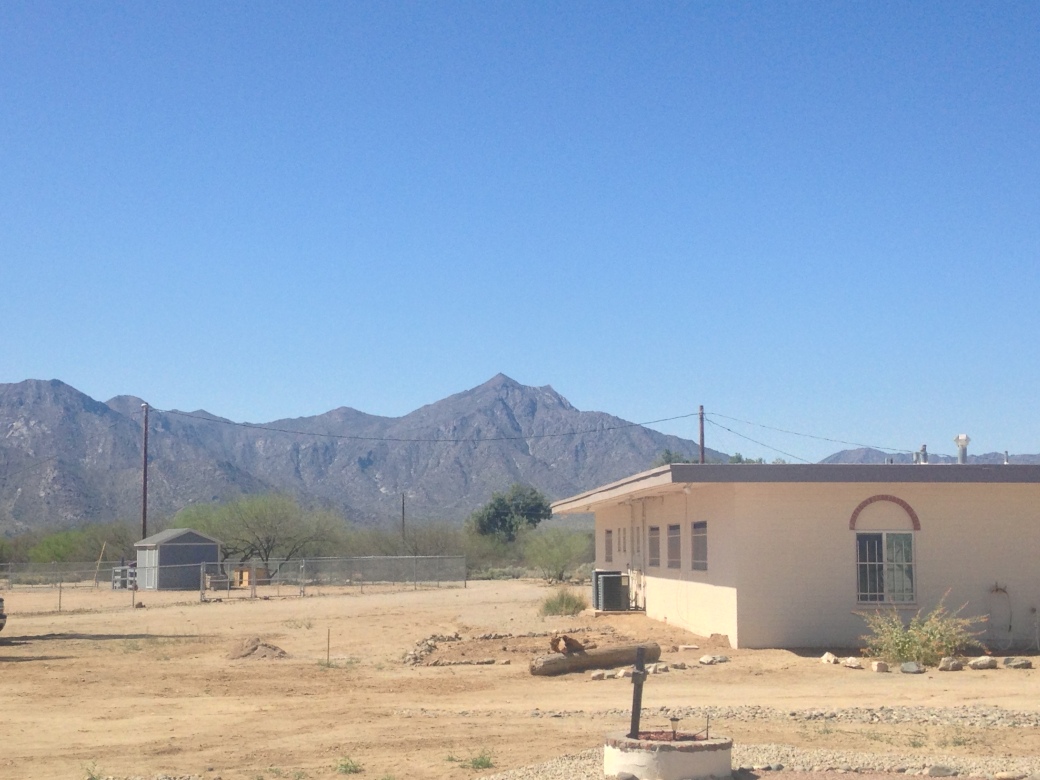 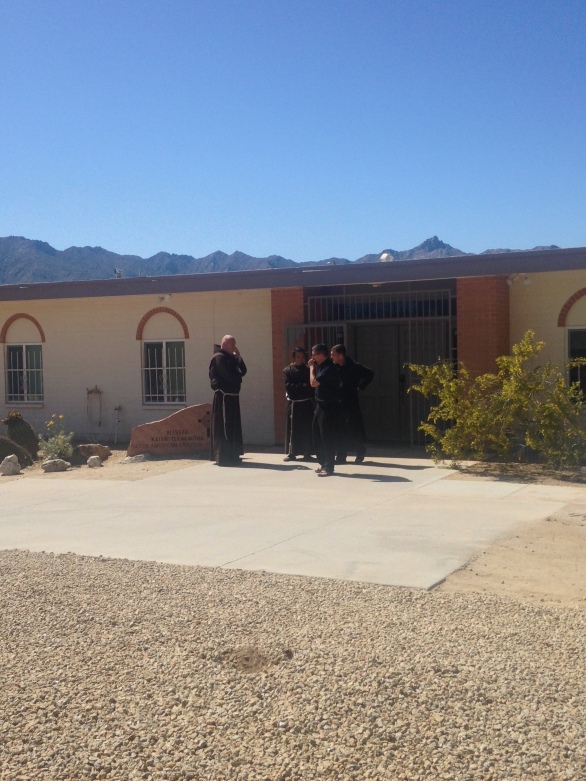 The Stations of the Cross before…

The Stations of the Cross after, new and improved by the Friars!  This is the 12th. 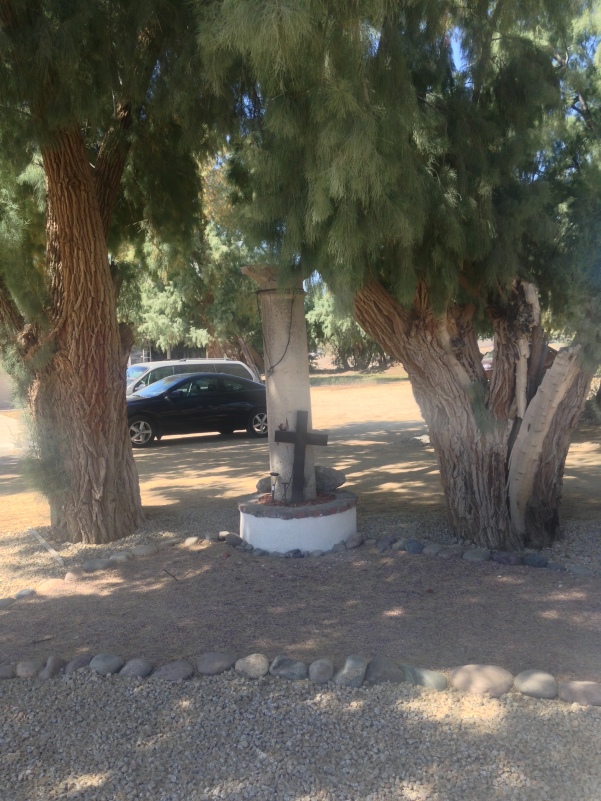 The First Station:  Jesus is Condemned. 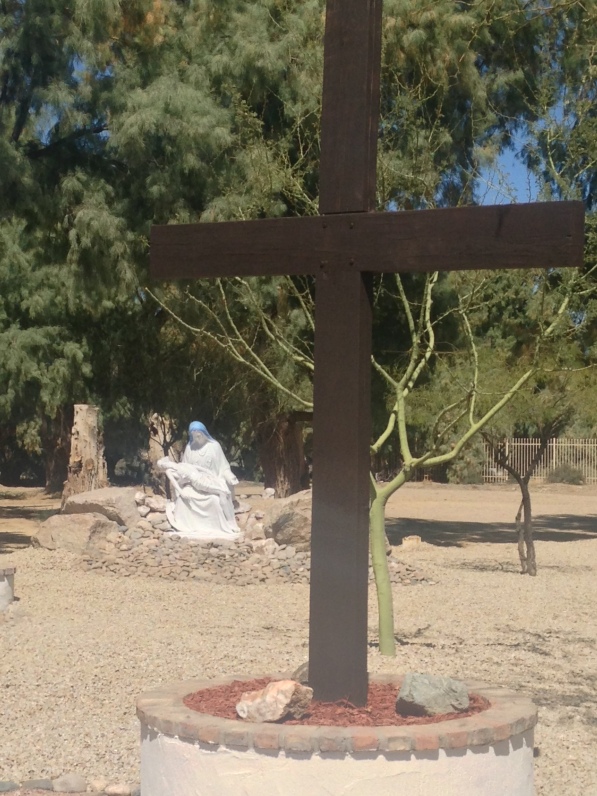 The 13th Station:  Jesus is laid in the arms of His Mother.

The 14th Station:  Jesus is laid in the tomb.

With a primary charism for conversion and metanoia, these Friars make a great impact…

Fr. Zyg Mazanowski, PhD in Moral Theology on Mercy, Forgiveness and Healing at Santa Croce University in Rome.  He gave a Lenten Retreat for  Staff of the Diocese at Mt. Claret Retreat Center.  He also serves as the Chaplain for the Catholic Physicians’ Guild of the Diocese of Phoenix.

Fr. Michael Tinker (right) serves as the Director of the Native American Ministry Office of the Diocese, and Fr. Augustine Lieb (left) serves as his Vicar for this ministry.

Fr. Ron Hurl is on the right.  He teaches philosophy at Notre Dame High School and is working on a PhD in Philosophy as well.  Next to him is Sr. Marie Do,  DC and Sr. Cabrini, DC and the very funny one is Fr. Augustine.   This photo is from our Day of Prayer on March 12.

It has been such a joy to see Religious Life blossom in this desert which is full of life.  Phoenix is truly experiencing abundant blessings of new communities and foundations to serve the entire Diocese.  As we pray for Mother Angelica and the repose of her soul, let us continue to have hearts filled with gratitude for the gift of Religious Life and charisms.

Blessed Divine Mercy Sunday and the 11th Anniversary of the Death of St. John Paul II! 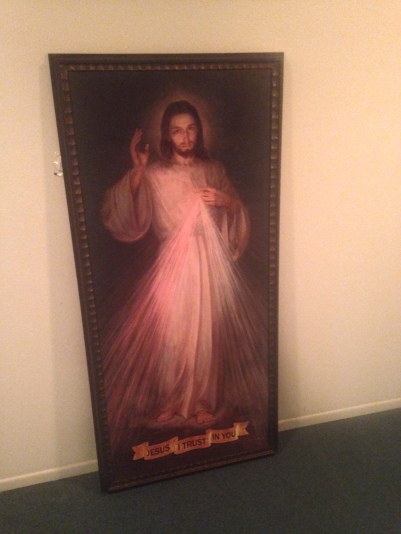