Saint Anthony the Abbot Tempted by a Lump of Gold, 1436 – Fra Angelico

Today, we celebrate the Feast Day of St. Anthony the Abbot (of Egypt), a “Desert Father” and the Founder of Monasticism.  He lived as a hermit, which is a form of consecrated life called “eremitic or anchoritic life”   The Catechism of the Catholic Church teaches us about what it means to be a hermit:  a life dedicated to praising God in silence and solitude.  The solitude, prayer and penance of the hermits are recognized as the beginning of monastic life of both men and women in the Church.

“The eremitic life:  Without always professing the three evangelical counsels publicly, hermits ‘devote their life to the praise of God and salvation of the world through a stricter separation from the world, the silence of solitude and assiduous prayer and penance.  They manifest to everyone the interior aspect of the mystery of the Church, that is, personal intimacy with Christ.  Hidden from the eyes of men, the life of the hermit is a silent preaching of the Lord, to whom he has surrendered his life simply because he is everything to him.  Here is a particular call to find in the desert, in the thick of the spiritual battle, the glory of the Crucified One,”  (CCC 920-921).

Much of what is known about Saint Anthony is from a biography I recommend:  Life of Saint Anthony of Egypt by Saint Athanasius of Alexandria.

St. Anthony was born at Alexandria in 251.  He lived to be 105 years old.  At eighteen years of age he was left an orphan, with one sister.  He had great rank and wealth.  Thoughtful from childhood, he feared the temptations of the world.  He would go to Church to pray frequently.  He heard his calling to follow Jesus Christ radically upon hearing the Gospel passage, Our Lord’s words to the rich young man:  “If you want to be perfect, go and sell all you have and give the money to the poor – you will have riches in heaven. Then come and follow me..” He was so impressed by these words, he gave his parents’ inheritance to the village, which comprised of 200 acres, a great estate which produced abundance crops.  He sold the remainder of his possessions, gathered the money and distributed it among the poor, but he laid by a little which was sufficient for his sisters’ wants.  The next time he went to church he heard the Lord say in the Gospel: Do not be anxious about tomorrow.  He promptly went out and gave the poor all that he had left.

Now unto his sister he spoke words of love, and of truth, and of the fear of God, and he made her mind to be like his own; and he delivered her over to certain chaste nuns who were living there at the time.  And when he had made an end of these things, he then became a solitary monk and trained himself in a life of strictest abstinence and self-denial, not far from his own home. He kept a careful watch over himself and practiced great austerity. He did manual work because he had heard the words: If anyone will not work, do not let him eat. He spent some of his earnings on bread and the rest he gave to the poor.

Having learned that we should always be praying, even when we are by ourselves, he prayed without ceasing. Indeed, he was so attentive when Scripture was read that nothing escaped him and because he retained all he heard, his memory served him in place of books.  Seeing the kind of life he lived, the villagers and all the good men he knew called him the friend of God, and they loved him as both son and brother.

The Temptation of St. Anthony Abbot by Annibale Carraci (1597)

Throughout his life, he was tempted by demons, which he always rejected.  As he resisted Satan’s torments, he was driven deeper into the desert to find more solitude and a life of asceticism and sacrifice.  His holiness is what drew many men to follow him to leave the world and dedicate their lives completely to praising God.  As he became famous, the monks of Egypt and all other folk who did not lead a life of the ascetic and recluse, men of distinction also, came to him in large numbers.  The  monks came that they might imitate his way of life and deeds, and the laity came that he might pray over them, and might heal certain of them from their sicknesses.

When there were too many people that followed him, and the trouble which men and women caused him increased, he became afraid that he would be unduly exalted in his mind by reason of the things which God had wrought by his hand or that he would be esteemed beyond what was just and more than he deserved.  So, he left that place to live his life in more solitude and prayer.  For him, God came first.

December 13th, the Feast of St. Lucy, I had the gift of visiting Fr. Eugene Florea at Merciful Heart Hermitage in Black Canyon City where Priests and Candidates to the Priesthood can find silence and solitude.  I was accompanied by Sr. Hania, a Contemplative Hermit from the Monastic Family of Bethlehem of the Assumption of the Virgin and St. Bruno from Livingston Manor, NY.  Fr. Eugene Florea is a Priest of Phoenix living as a Diocesan Hermit on the top of a mountain.  The climb up the steep mountain with a winding, narrow (one-way) road requires much courage for any first-time visitor.  After 7 years there, he is experienced with such challenges.  With his help, we made it to his residence and the hermitage surrounded by the beauty of God’s creation. 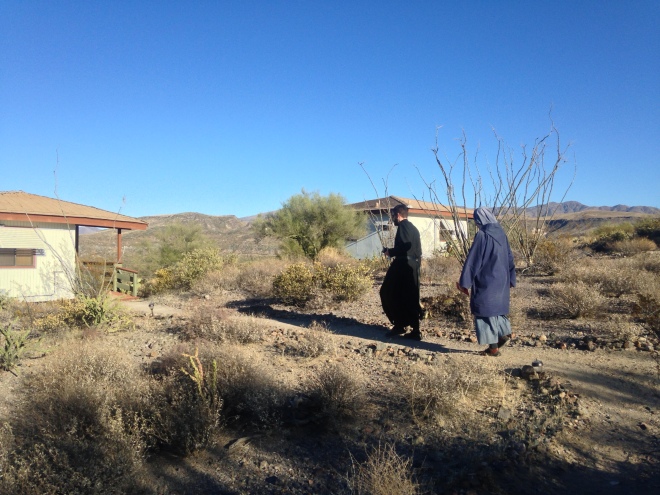 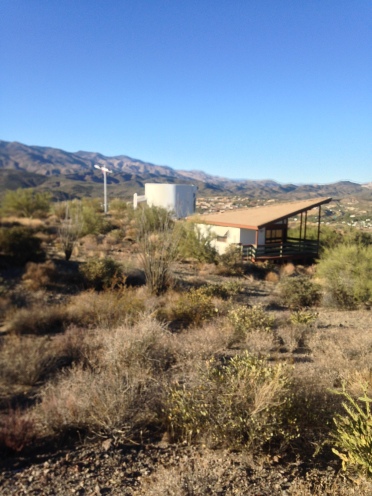 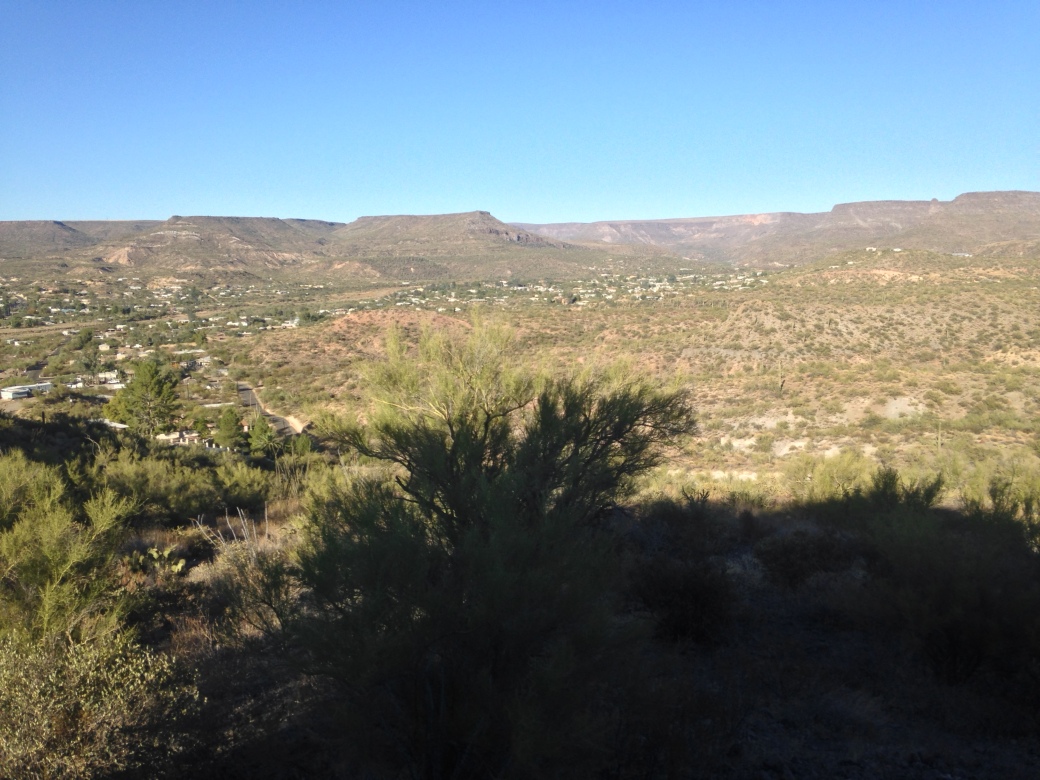 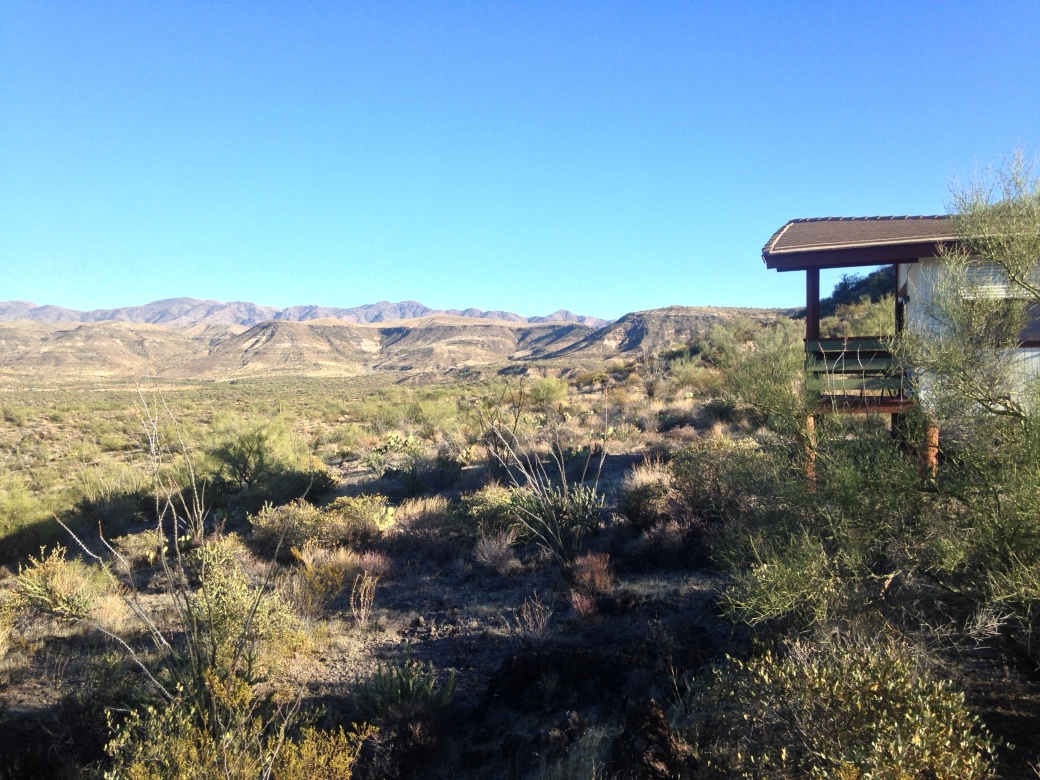 A hermitage overlooking the grandeur of Black Canyon City 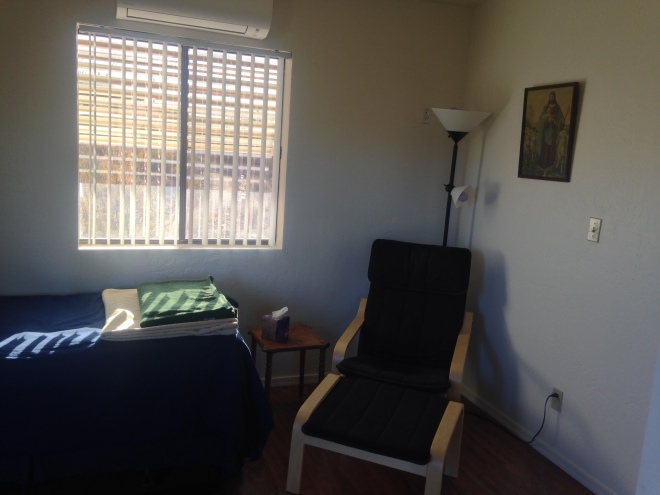 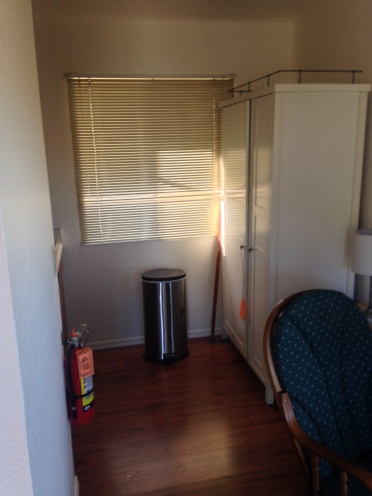 Inside a hermitage, a perfect place for a silent retreat. 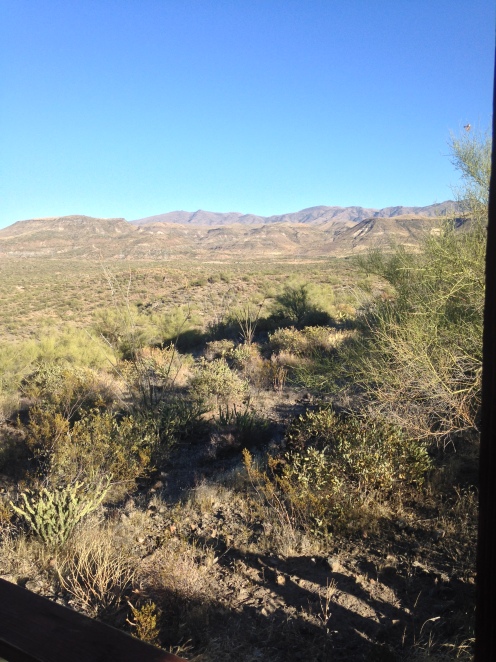 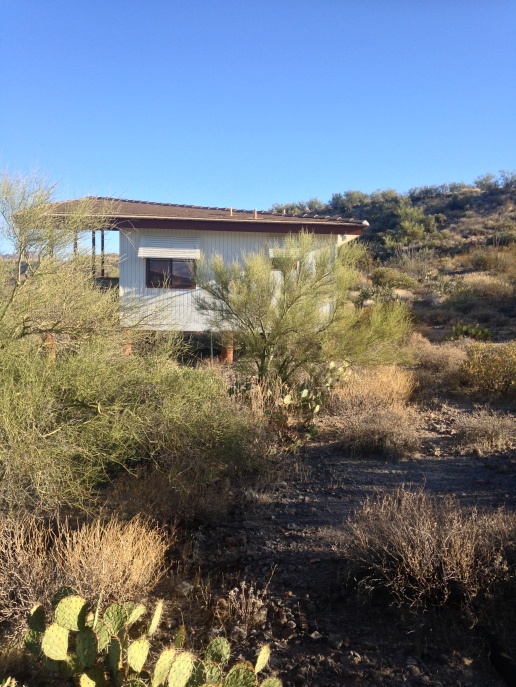 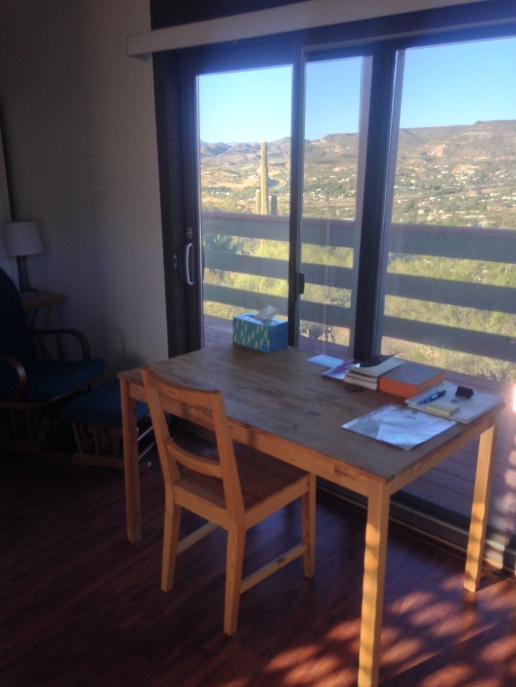 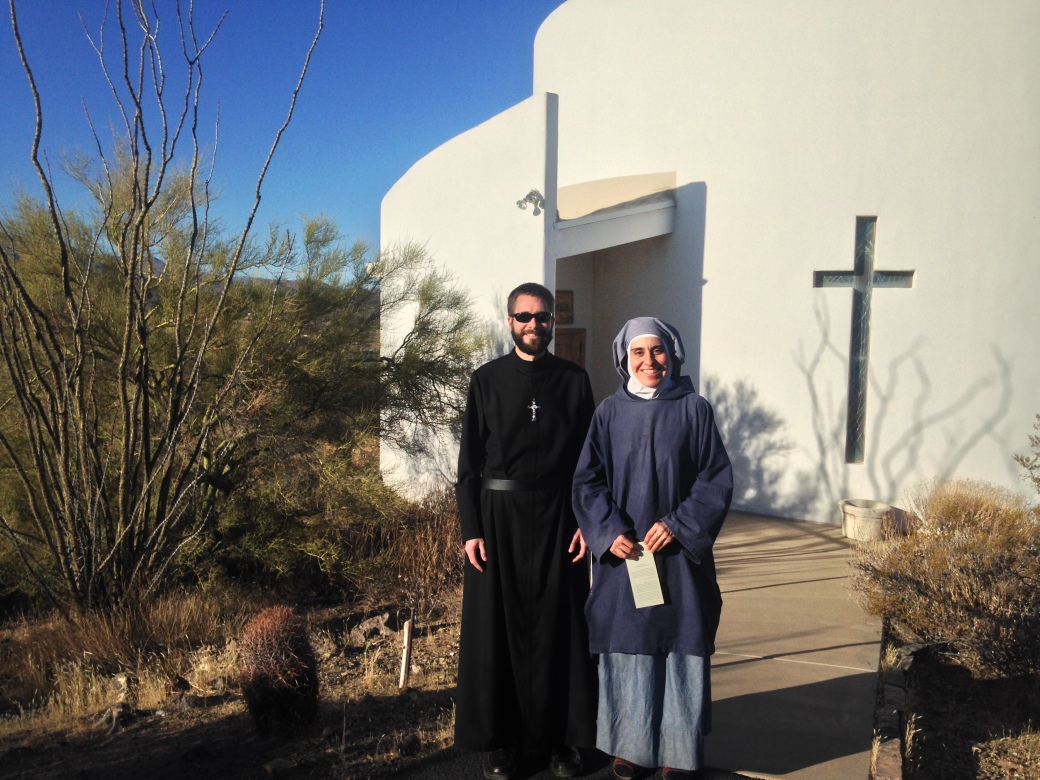 Originally from Mexico, Sr. Hania enjoyed her stay in Phoenix from December 9 -13.  She joined us in the great celebrations for the Feast of Our Lady of Guadalupe, the Patroness of Phoenix.  Sr. Hania’s joy to be here was seen in her evident exuberance.  When I arrived at St. Anthony’s Parish in Phoenix, she showed me an amazing gift made and arranged by the parish community.

A Shrine to Our Lady of Guadalupe with one thousand roses decorating her image!

The devotion of Our Lady’s children is what is so precious and breathtaking here.  Can you imagine the amount of time and care that went into decorating with these roses?  This gift praises God and called forth many hearts to come and pray to Our Mother.  For Sr. Hania, a Contemplative Hermit who lives in the secluded forest of New York, this is a rare sight.  For Father Florea, who lives secluded on a desert mountain, this is a gift none of us expected for him to receive.  It was a special grace granted through the intercession of St. Juan Diego, Our Lady of Guadalupe and St. Lucy!  With courage, we continue to follow the Lord’s mysterious plan for those called to this noble vocation to be separated from the world to be dedicated entirely to God.

St. Anthony of the Desert, pray for us!

With gratitude and prayers,

Director of the Office of Consecrated Life