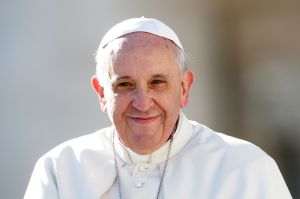 Dear Brothers and Sisters in Christ,

Just recently, I was asked a great question:  Is Pope Francis Franciscan?  Certainly, there are many who have wondered this and would like to know more about this Jesuit Pope who has called this Year of Consecrated Life, asking all Religious and Consecrated Men and Women to rejoice and have gratitude for the Religious Life.

Pope Francis is not a “Franciscan” or a member of the Order of Friars Minor (OFM). He is a Religious Order Priest who is a member of the Society of Jesus (SJ), also known as “the Jesuits”.  The Society of Jesus is a Roman Catholic order of priests and brothers founded in Rome in 1540 by a Spanish Priest, Saint Ignatius of Loyola, known for writing The Spiritual Exercises which includes The Discernment of Spirits.

Like Saint Ignatius, the Jesuits seek to “find God in all things.” Jesuits dedicate themselves to the “greater glory of God” and the good of all humanity. Jesuits draw on the rich tradition of Ignatian spirituality and reflection. In their retreat centers, parishes, campus ministries, and other settings, they offer these resources to all who want to discern God’s presence in their lives. At the same time, they also aim to be “contemplatives in action,” people who bring this spirituality into the wide world. That includes our work on behalf of global justice, peace, and dialogue.

“Holy Father, what made you choose to enter the Society of Jesus? What struck you about the Jesuit Order?”

Pope Francis explains:  “I wanted something more. But I did not know what. I entered the diocesan seminary. I liked the Dominicans and I had Dominican friends. But then I chose the Society of Jesus, which I knew well because the seminary was entrusted to the Jesuits. Three things in particular struck me about the Society: the missionary spirit, community and discipline. And this is strange, because I am a really, really undisciplined person. But their discipline, the way they manage their time—these things struck me so much.

“And then a thing that is really important for me: community. I was always looking for a community. I did not see myself as a priest on my own. I need a community. And you can tell this by the fact that I am here in Santa Marta. At the time of the conclave I lived in Room 207. (The rooms were assigned by drawing lots.) This room where we are now was a guest room. I chose to live here, in Room 201, because when I took possession of the papal apartment, inside myself I distinctly heard a ‘no.’ The papal apartment in the Apostolic Palace is not luxurious. It is old, tastefully decorated and large, but not luxurious. But in the end it is like an inverted funnel. It is big and spacious, but the entrance is really tight. People can come only in dribs and drabs, and I cannot live without people. I need to live my life with others.”

Father Spadaro concludes:  While the pope speaks about mission and community I recall all of those documents of the Society of Jesus that talk about a “community for mission” and I find them among his words.

Another great question by Father Antonio Spadaro for Pope Francis:

“What is the specific place of religious men and women in the church of today?”

“Religious men and women are prophets,” says the pope. “They are those who have chosen a following of Jesus that imitates his life in obedience to the Father, poverty, community life and chastity. In this sense, the vows cannot end up being caricatures; otherwise, for example, community life becomes hell, and chastity becomes a way of life for unfruitful bachelors. The vow of chastity must be a vow of fruitfulness. In the church, the religious are called to be prophets in particular by demonstrating how Jesus lived on this earth, and to proclaim how the kingdom of God will be in its perfection. A religious must never give up prophecy. This does not mean opposing the hierarchical part of the church, although the prophetic function and the hierarchical structure do not coincide. I am talking about a proposal that is always positive, but it should not cause timidity. Let us think about what so many great saints, monks and religious men and women have done, from St. Anthony the Abbot onward. Being prophets may sometimes imply making waves. I do not know how to put it…. Prophecy makes noise, uproar, some say ‘a mess.’ But in reality, the charism of religious people is like yeast: prophecy announces the spirit of the Gospel.”

So, why did he choose the name Francis? 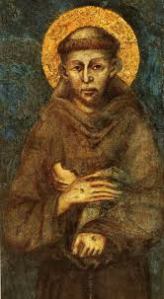 On March 13, 2013, just moments after Cardinal Jorge Bergoglio, S.J. was elected as the Roman Pontiff, Cardinal Hummes came up to him, hugged him and kissed him, and he told him, “Don’t forget the poor.”  Pope Francis told thousands of journalists March 16 that he took to heart the words of his friend and chose to be called after St. Francis of Assisi, “the man of poverty, the man of peace, the man who loves and protects creation,” the same created world “with which we don’t have such a good relationship…How I would like a church that is poor and that is for the poor.” Now, we see this expressed in his new Encyclical, Laudato Si’.

On the Feast of St. James the Greater, July 25, we went to visit San Xavier Mission in Tuscon, where Padre Eusebio Kino, S.J. founded the Catholic Church in Arizona.  It is a sacred place where pilgrims come to pray and ask Saint Francis Xavier for help, favors and even miracles.  There are Masses celebrated here as well as Spanish style sacred art and statues that life the heart and mind to God in prayer.

The Sanctuary of San Xavier 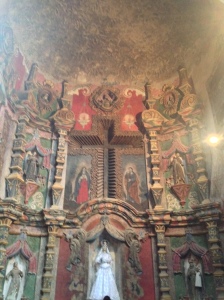 Side Altar with Jesus and St. Xavier

A Pilgrim Venerating a Statue of San Xavier 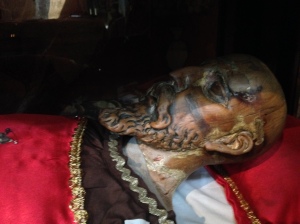 The Head of the Statue of San Xavier

An Angel Hovers Over Us to Assist

Saint Joseph, Pray for Us!

Saint Ignatius, Pray for Us! 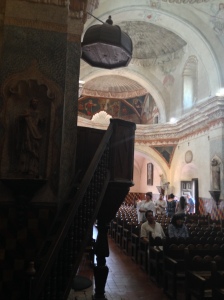 From Behind the Pulpit…

Looking up and completely amazed!

The Virgin Mary in the Sanctuary.

The Franciscans took care of this Mission Church after the Jesuits were expulsed. 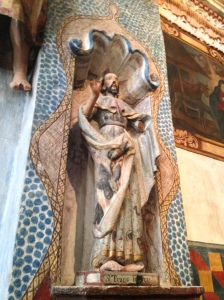 St. James the Greater, the Patron of Spain, who is responsible for the sea shell theme and this Feast Day!

Along the top rim of the wall of the entire Church there is a rope to carry us to heaven.  The rope throughout the Church is a Franciscan theme.

St. Francis Xavier, SJ, was a contemporary of St. Ignatius.

A strong devotion to Our Lady of Sorrows is clear in this place.

Saint Kateri Tekakwitha, “The Lily of the Mohawks.”

Saint Kateri, Pray for Us!

St. Anthony of Padua, Pray for Us!

The Bells of the White Dove 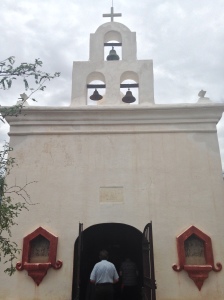 The Chapel of Our Lady of Sorrows 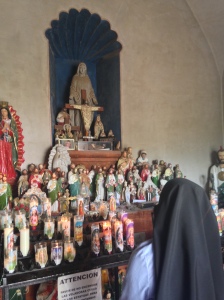 Sr. Maria Crucis (Mary of the Cross) prays to her Patroness.

It is inspiring to those who have visited over the centuries, including Ted DeGrazia, a great Arizonan artist whose paintings depict the beauty of the people and culture of this beautiful State of Arizona, including the Native American Indian peoples.  DeGrazia was born and raised in Arizona of Italian immigrant parents.  He had a deep Faith and appreciation for prayer and spirituality.

Later that same day, we visited Ted DeGrazia’s Studios:  “The Gallery in the Sun.”  In his Studios, we were able to see the original paintings of DeGrazia which included stunning images of Native American Indian peoples, Padre Eusebio Kino, San Xavier Mission, the Madonna and Child, St. Francis of Assisi and even Angels!  Here are some incredible works of art we had the gift of seeing firsthand on a tour by Carol Locust, who worked directly with DeGrazia for 11 years.

Carol Locust, our tour guide and friend of DeGrazia. 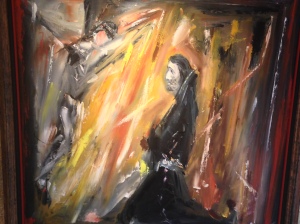 Padre Kino praying before the Crucifix

Children in a Procession 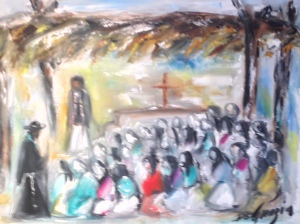 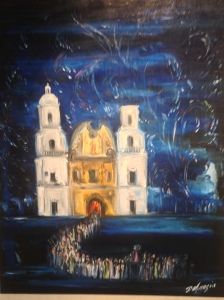 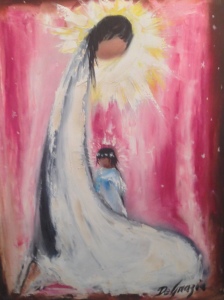 The Virgin Mary with the Child Jesus

The Madonna with Child

St. Francis of Assisi and the Birds

St. Francis with the Birds 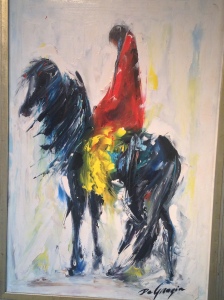 Native Am Indian Woman on  Horse.

Before this painting, he felt the presence of the Angels.

Entrance to his Chapel.

The Chapel where he would pray.

DeGrazia’s Chapel – Gallery in the Sun. 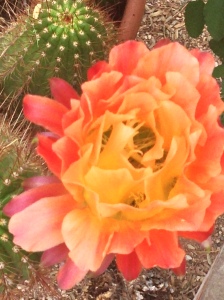 A cactus flower that only blooms once a year!

You’ve got to come to DeGrazia’s Studios in Tucson!

Until next time, my friends.

Your Sister in Christ,